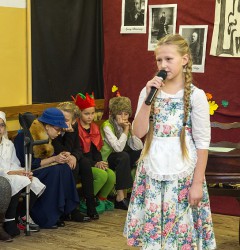 Another extraordinary meeting of several generations under the name of Lviv Meeting was held at  Primary School in Szczeglino, which marks the anniversary of decorating Lviv with the Cross of Military Virtue. The artistic programme prepared by the pupils included  Lviv songs and fragments of novels, such as “Zemsta” written by Aleksander Fredro and poems, such as “Koziołek Matołek” written by Kornel Makuszyński. This year’s meeting was also devoted to extraordinary Polish citizens – creators of art and science closely connected with Lviv. We learned about such people as Ignacy Łukasiewicz, a pioneer of oil indusrty or Stefan Banach, a great mathematician. Col Wojciech Grobelski presented a touching story of the origins of the Grave Of The Unknown Soldier in Warsaw. After the official meeting there was time for conversations over coffee and delicious cake, a variety of exciting topics on Lviv and Borderlands.